Whatever You Do, Don't Read This

It's Banned Books Week! Celebrate the freedom to read.

It's 2019, and people are still trying to ban books? Or burn books?

Banned Books Week is an annual celebration of the freedom to read the books you want to read. People ask libraries to get rid of books they don't like (we call this a "challenge"), and when they do, libraries send a report to the American Library Association (ALA) Office of Intellectual Freedom. Every year, the OIF creates a list of the books that get challenged the most.

Recently the African American Museum and Library at Oakland (AAMLO) rededicated the space allowed for its new and improved seed library. This idea of seed sharing and back to the earth ideas evoke images of 60s flower children and forest communes. For those of us older than fifty who among us cannot remember a visit to grandma’s and the unbelievably delicious foods she cooked with vegetables and fruits from her prized garden. Oh my!

Today, nostalgia has been replaced by practicality when it comes to access to fresh fruits and vegetables, especially people who live in inner city neighborhoods that often do not have grocery stores that stock healthy foods. Add to that the spectre of untested genetically modified vegetables that are at this moment in the produce section of your favorite market.

Oakland is proud! Celebrate Pride with us this #OPLsummer.

We're excited to bring you fun events this summer to celebrate Pride!

Check this page for event updates and new events!

Celebrate LGBTQ Pride month with us with a party out in the library patio! We will have a variety of games and refreshments for teens. Presented by the Chávez Teen Advisory Board. Sponsored by the Amigos of the César E. Chávez Library.

Planning for your next travel destination? The Main Library's annual Spring Travel Series is back! Get new ideas for traveling and learn about lesser known paths taken locally, nationally, and abroad.

Join us for the popular Spring Travel Series, coordinated by our History Room Librarian Dorothy Lazard!

Kicking off this year's series is journalist/professor Wanda Sabir who will share stories of her travels to Ghana. This year has been designated "The Year of Return." Many African nations are inviting African descendants home to celebrate a shared heritage. Ms. Sabir will share details about the biannual Ghanaian Panafest that will feature many outstanding performances, celebrities and activities. She will also provide information about a variety of

During the month of April AAMLO celebrated Jazz Awareness Month with Jazz Classics in Perspective.

During the month of April the African American Museum and Library at Oakland hosted Jazz Classics in Perspective. The three week class showcased the earliest origins of West Coast jazz. On Saturday, April 20th we received a surprise guest, artist, composer, and saxophonist John Handy. Born in 1933, Handy at the age of 13 taught himself to play the clarinet. By age 15 he was playing professionally.

As a professional, Mr. Handy has performed throughout America in places such as Carnegie Hall, San Francisco Opera House and the Monterey Jazz Festival. He has also played internationally in Japan, Germany, France and countless other locations.

Bike to books! Celebrate bike month this May with Oakland Public Library. 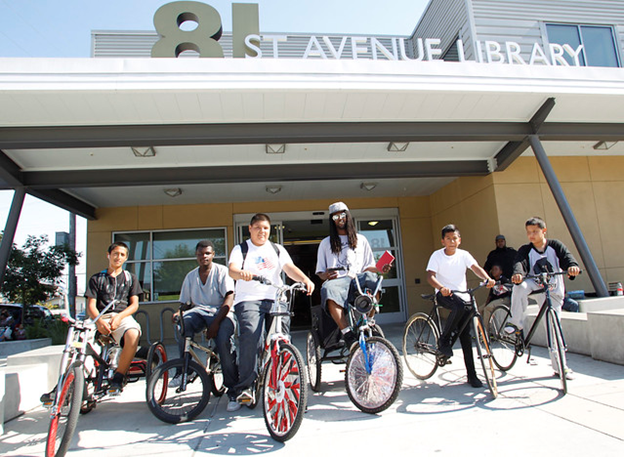 Are you a bike enthusiast? Or are you bike curious perhaps? Whether you're an expert or a beginning bike lover, May 2019 is packed with opportunities to embrace two-wheeled ways at OPL.

Have a flat tire that needs to be fixed?  Want to scraper your bike?  Come get free minor repairs and get back riding in style!
81st Avenue Branch, 1021 81st Ave.

In April 2018 the African American Museum & Library at Oakland was awarded a Council on Library and Information Resources (CLIR) Recordings at Risk grant to digitize and provide access online to 98 films documenting the Black Panther Party and student and union protest movements of the late 1960s-1970s from the Henry J. Williams Jr. Film Collection.

In April 2018 the African American Museum & Library at Oakland was awarded a Council on Library and Information Resources (CLIR) Recordings at Risk grant to digitize and provide access online to 98 films documenting the Black Panther Party and student and union protest movements of the late 1960s-1970s from the Henry J. Williams Jr. Film Collection. The films included footage shot by the documentary film collective Newsreel, an organization founded in New York City in 1968 by a group of radical filmmakers with collectives in New York, San Francisco, and Los Angeles. California Newsreel produced three documentary films on the Black Panther Party, Off the Pig (1968), MayDay (1969), and Repression. The digitized films include outtakes and b-roll footage filmed at a Black Panther Party Free Huey (Newton) rally on May 1, 1969 at the Phillip Burton Federal Building and U.S. Courthouse in downtown San Francisco, California. The films

This week marks the anniversary of legendary cartoonist Morrie Turners launch of Wee Pals.  The son of a Pullman Porter, Morris Turner, was born in Oakland, California on December 11, 1923. A product of the Oakland schools system he attended Cole Elementary and McClymonds High School before completing his studies at Berkeley High School. Turner spent his entire career as the syndicated cartoonist of the WeePals, a multiethnic cartoon strip.

Turner began drawing at the age of 10 as a means of communication. With no TV, and paper from the local butcher shop, he would listen to shows and plays on the radio and draw what he heard. By age 14 he decided he wanted to be a cartoonist.  His father was not happy with his desired profession as it was not manly. As his mother

February is Black History Month! Celebrate, commemorate, have fun, and learn something new with your library.

Join AAMLO staff every Saturday at 4:00 p.m. for a guided 45-minute tour - an introduction to the African American Museum & Library at Oakland, including the permanent multi-media history exhibition, “Visions Towards Tomorrow: The African American Community in Oakland, 1890-1990,” and the mural, “Journey of Promise.” Tours focus on AAMLO's history, architecture, and collections with an emphasis on the historical accomplishments and cultural experiences of African Americans in California and the West. All tours include a visit to the reference library,

Check out the beautiful work from Growing Up Oakland, a project created and run by Oakland Youth Poet Laureate poets.

Growing Up Oakland is a project entirely created and run by Oakland Youth Poet Laureate poets. Seeing a need for an expansion of the Oakland narrative, they are retrieving and broadcasting stories of childhood in Oakland through poetry, interviews, and visual art.

Growing Up Oakland highlights the variety of experiences of childhood throughout the long life of the city by using both interviews from people who grew up across various decades and creative work by current Oakland youth. This is a memorial of how the experiences of Oakland and youth have both changed and stayed the same throughout time.

After interviewing a variety of people who have grown up in Oakland, the poets have been taking these interviews into Oakland schools and leading poetry workshops.

The first workshop was with an 11th grade class at Oakland Technical High School. Some of the poems born out of these workshops have transformed into tangible postcards that are currently being distributed around the