Posted on June 9, 2014 by Amy Martin to Children's Services Blog

Have you self-published a children's book?

If you've ever uttered the words "I have this great idea for a children's book!", you're in good company. And bad company. And, well, just lots of company. Seems like just about everyone is trying their hand at writing children's books these days, and thanks to the plethora of self-publishing platforms that exist, it's never been easier to turn that gleam in your imagination into a real, honest-to-goodness book.

Which is not to say that it's easy. In many ways, self-publishing is more difficult than the traditional method of working with an established publisher. The question I hear most in my role as children's collection management librarian for Oakland Public Library is "how do I get my book into your library?" It's a complicated answer,

Posted on June 9, 2014 by Mana Tominaga to Reference Services Blog

Get detailed instructions on downloading an eBook from OverDrive to your Android Smartphone or tablet!

Oakland Public Library offers a variety of eBooks and eAudioBooks. You can download digital content any time, to a computer, or a variety of devices. I'll post detailed instructions for various collections, using different devices, over the next few days. Although the steps might seem a bit daunting, once you get your first title, the rest are easy! And remember that e-materials NEVER accrue fines.

Today, we'll look at downloading eBooks to an Android tablet or a Nexus smartphone - bascially any Android device that can download apps from the Google Play store. First, you'll need to download the free OverDrive app at the Google Play Store. Please search for and download "OverDrive Media Console."

To checkout EPUB eBooks, you will need to create a free Adobe ID account. The library uses this to manage licenses of our digital books in OverDrive and another collection called Enki. It's entirely free - you just need an email address to set this up. Please follow the instructions in the app to complete this step

Posted on June 6, 2014 by Christy Thomas to Advice for Readers

Ready for your first great book of the summer? Here are 10 great titles coming out in June.

Oakland Library revs up for the lazy days of summer. Take the reading challenge, and join us for lots of performers, crafts, free lunches, and other activities.

Our children's Summer Reading Challenge runs from June 14 through August 9. There are some changes this year. We have changed both the rules and the prizes. We are counting days read instead of hours. And we are awarding coupons at ten days and a badge (see right), a book, and raffle entry at twenty days.

Posted on June 3, 2014 by Jenera Burton to Advice for Readers

How does your garden grow?

If you’re like me, the most successful plant is your garden is some variety of weed. I’m really good at growing those. In my attempt to tame the jungle, I’ve turned to these two books.

What color is your thumb?  According to the USDA, June is National Fresh Fruit and Vegetable Month, it’s also a great time to get into your garden. What better way to boost the fruit and veg in your diet than to grow your own!?  If you’re like me, the most successful plant is your garden is some variety of weed.  I’m really good at growing those.  In my attempt to tame the jungle, I’ve turned to these two books, they are both fun and practical. 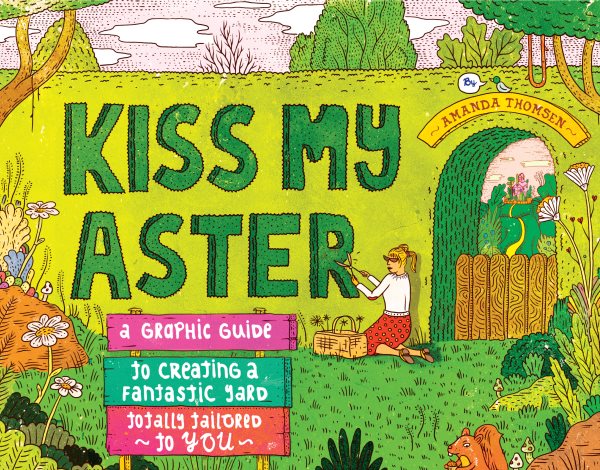 Kiss my aster : a graphic guide to creating a fantastic yard totally tailored to you by Amanda Thomsen
This

"Nothing can dim the light which shines from within."

Essayist, poet, actress, director, activist, raconteur Maya Angelou died Wednesday at the age of 86. Her zest for life was legendary. She was a role model and mentor to generations of writers, students, and women.

The honors Dr. Angelou was awarded during her lifetime go on and on. Grammy winner and holder of the Presidential Medal of Freedom; Pulitzer and Tony award nominee. She received dozens of honorary degrees, including one from Mills College. Rollins College in Florida has a library named in her honor. Bill Clinton asked her to recite her poem "On the Pulse of Morning" at his1993 inauguration.

In a lighter mood, she endeared herself to a generation of Sesame Street viewers with her appearances in the 1990s, including this one.

Posted on May 23, 2014 by Rebekah Eppley to Advice for Readers

May is Short Stories Month and OPL has stories for you!

May is Short Stories Month so why not dive into some newly released short fiction.  The following is just a sampling of the short story collections released in 2014 available at OPL.  All summaries are from the publisher's descriptions.

Oakland's libraries have parenting materials that will answer questions you may have about raising a baby.

Is your baby having trouble sleeping through the night?  Is breastfeeding not going well?  How and when do you introduce food to babies?  What are the appropriate developmental stages babies go through and when should babies go through them?  Can babies learn sign language?  And, of course, a topic close to my heart, how do you read to a baby?

Raising a baby is hard work and we are here to help.  Last month I highlighted  some of the programs we offer babies and their families.  This month, we look at some of the materials we offer.  All of Oakland's libraries have parenting books, magazines and DVDs that can help you figure out how to best care for a baby and answer any questions you might have.  In fact, we have parenting materials for all ages of children and all kinds of families.   Just go to our home page at www.

Yuyi Morales is Coming to Oakland

Psst! Have you heard? Yuyi's coming to Oakland!

The Oakland Public Library (OPL) will be hosting Yuyi Morales at the César Chávez Branch on Tuesday, May 27th, at 6:00pm.

Yuyi Morales is an award-winning author and illustrator whose books include Niño Wrestles the World, Just in Case, Little Night/Nochecita, and

Posted on May 15, 2014 by Tamar Kirschner to Advice for Readers

Discover your next favorite book with NoveList

Novelist Select is transforming our online catalog into a place for book discovery beyond the library walls. Find personalized recommendations, reviews and more right in the catalog.

You may have noticed that our online catalog is looking snazzier these days. We have enhanced it with Novelist Select, offering over 5 million reading suggestions to help you find your next book.

The Readers' Advisory database known as Novelist Plus is not new to us, as we have offered it for several years. OPL patrons have often been delighted to find a NoveList match made in reading heaven for their interests. Here you will find "read-alikes" for favorite titles, authors, and series, or browse by topic or genre for lists of recommended titles. Access to NoveList Plus is also available through a