Posted on September 5, 2014 by Christy Thomas

Need a great book? Look no further. Here are ten great novels coming out this month, plus a bunch of short story collections. Place your holds now!

Fact vs truth in non fiction

Is "truthiness" acceptable in non fiction? An essayist and a fact-checker hash it out. 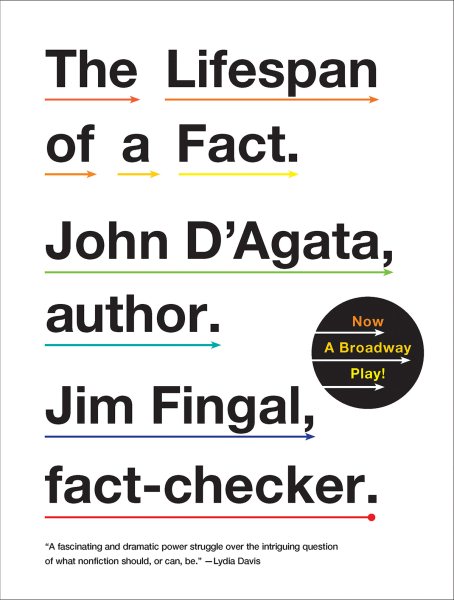 Humorist Stephen Colbert coined the term "truthiness" in 2005, it means the quality of feeling that something is true even if it really isn't. The Lifespan of a Fact  is a conversation between the author of an essay, John D'Agata and the fact checker, Jim Fingal. The magazine that originally commissioned the work later refused to publish due to factual inaccuracies, but it became the basis for D'Agata's 2011 book "

What was it like to be married to William Shakespeare or Zelda Fitzgerald? Check out these fictionalized accounts of famous literary couples.

Did you know that August is National Romance Awareness Month?  I didn't, but I recently came across this article in the Huffington Post, which inspired me to highlight literary romances in this post.  During the past few years fiction titles focusing on famous literary couples have been popular.  Here are a few available at OPL.

Let Books & Authors find that next great read for you

Books & Authors is a database at Oakland Public Library that can help you explore titles, authors, and various subjects, to find that next great read.

In May, I posted about Novelist Plus, and the variety of ways it connects readers with the right books for them. This month, Andrew Demcak tells us about another OPL database just for book lovers. Take it away, Andrew....

Avid and casual readers know that feeling: You’ve just finished a great book and you want to start a new one. But which book will be your next book?  Books & Authors is a database at Oakland Public Library that can help you explore titles (both fiction and nonfiction,) authors, and various subjects, to find that next great read.

Zealot: The Life and Times of Jesus of Nazareth by Reza Aslan.....The Lakeview Book Club Update

Lakeview Book Club Update on the discussion of Zealot: The Life and Times of Jesus of Nazareth.

Our discussion leader did an outstanding job in presenting the background story on Zealot.

Dr. Reza Aslan is a non-religious American whose family emigrated from Iran to the United States when he was a child. His family was Muslim. He was invited to go to a Christian summer camp and became a Christian, because it attracted him emotionally and helped him feel he belonged. He was a practicing Evangelical Christian for some years. He was later educated by Jesuits and investigated the historical Jesus, finding that he could no longer be Christian. He studied Islam and found that he was attracted to it intellectually.

In his book about Jesus, he pulled from the few historical records of the time and from the social history of the era. In his research he discovered that much we have all been taught about the life of Jesus does not correspond to the real history of the times. He points out that three fourths of the New Testament was

Place your holds now for these great novels arriving soon!

Planning to see the movie? Read the book first!

Earlier in the year I highlighted books made into films during the first half of 2014.  Many more book-based movies are scheduled to release in the coming months.  Here are just a few, all available at Oakland Public Library, so you can check them out before seeing the movie!

With your Oakland Public Library card, you can request any LINK+ book that isn't available from OPL.

Guess how many books you have access to at OPL. Go ahead, guess. A million? 5 million? Go....higher. Yes, we do have over a million print titles in our collection and, with a service known as LINK+, an extension of our Interlibrary Loan service, you can choose from over 11 million print titles from participating public and academic libraries in the area.

Lakeview Book Club Update: The 100-Year-Old Man Who Climbed Out the Window and Disappeared by Jonas Jonasson

The seven off us, including new member liked the book, even if it wasn't our typical type of book we usually choose to read. Not everyone finished it. A few thought it slowed down in the middle. We all found parts that made us really laugh, some of us more than others. There was a great deal of laughter during the meeting as we discussed some of the sillier and surprising elements.
One member thought the plot was predictable and the humor was because of the way the events were described. That member noted that the translator had to have been exceptionally good.
We wondered if Jonas Jonasson was really that funny in real life. (I figure he has to be.)
Mr. Jonasson, born in 1961, was a journalist who at one time owned a large publication, which he sold so he could write his novel. This novel has been

Place your holds now on these great books coming out this month!